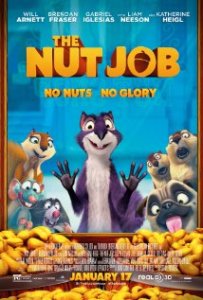 In the world of animation, it’s tough going up against the big dogs at Disney and Pixar. Even Dreamworks with their “How to Train Your Dragon” and “Kung Fu Panda” films have to work for every dollar they get at the box office. So when you’re an unaffiliated animated film opening in January (where movies go to die), you’re already fighting uphill.

Based on a short film called “Surly Squirrel” from 2005, “The Nut Job” follows Surly (voiced by Will Arnett), an aptly named squirrel who would rather do things on his own than to work with the rest of the animals in the park. When he inadvertently burns down the park Oak Tree (where all the food is stored) he is unanimously voted into exile and kicked out of the park.

Now out “on the street” (literally), Surly and Buddy, his mostly silent rat friend, stumble upon a nut store, of all things, and celebrate hitting the rodent jackpot. Meanwhile, the rest of the animals in the park are freaking out because they have no food stores for the winter. The leader of the wild bunch, Raccoon (voiced by Liam Neeson), sends park hero Grayson (Brendan Fraser) and Andie (Katherine Heigl) to find more food. They find Surly and Buddy, discover the nut store, and agree to share the wealth 50/50 between Surly and the rest of the park.

While all this is happening in the animal world, a pair of goons has acquired the nut store as a cover so they can tunnel under the road and into the bank.

Two heist movies in one, you ask? Oh yeah, baby.

Other members of the voice cast included Stephan Lang as King, the big baddie in charge of the bank job, Maya Rudolph as Precious, the pug, and comedians Jeff Dunham and Gabriel Iglesias to name a few. The animation style reminded me of “Ratatouille”, although there are some scarier characters than the Disney film, particularly the street rat gang who cause trouble for Surly. Yikes. Also there’s a lot more death than I expected for an animated film. Nothing graphic, but my goodness; if you know what a mouse trap does to a rodent, it’s not quite as funny as they make it seem…

Betrayal, double-crosses, unlikely heroes, and true friendship are the overriding themes of this movie, and I ended up enjoying it a lot more than I’d expected. It takes a little while to get it’s footing, but once it does, it’s a pretty good ride. It’s rated PG, so not for the little-little ones, but I’d say five and up would probably enjoy this quite a bit. And you won’t pull your hair out if it’s on repeat. And there’s a sequel slated for 2016

Four out of Five Snack Packs