(Editor’s Note: This review was written months ago and was only recently published in the Holyoke Enterprise May 19, 2016)

Have you noticed Selena Gomez is everywhere lately? She recently was the musical guest on Saturday Night Live, she had a quick cameo in the movie The Big Short, and she keeps popping up on my Pandora stations. Being a 30 year old male who doesn’t watch the Disney channel, I found myself asking, “Who is Selena Gomez again?” Turns out, she’s not Vanessa Hudgens either. Go figure. While looking through Netflix for something to review, I came upon this week’s movie in the “Girl Power” section and figured I’d give it a shot. I’ve never seen any of the television show of the same name (which I also confused with the other Disney show with the twins from Big Daddy. Basically, I’m clueless, it seems), but knowing Disney and their formula for most shows, I figured I could pick up the backstory as I went.

We begin with the Russo family getting ready to go on vacation to Puerto Rico, where the parents first met. Alex (Gomez) is a notorious screw-up within her family, constantly overshadowed by her older brother Justin (David Henrie, the son from How I Met Your Mother) who is turning out to be a pretty terrific wizard. He has recently acquired the family wand from his father as well as a book of forbidden spells. Their parents forbid them from using the book or even bringing their wands on the trip, but sneaky Justin brings them anyway. After a fight with her mom and while holding the wand, Alex wishes her parents never met, thereby creating a Back to the Future-type scenario where all five of them begin to forget they were ever a family, and little brother Max (Jake T. Austin) is most affected by the spell. Despite their best efforts to get their parents together, they slowly begin to forget everything about their past and about each other. They have to work together to find a magic stone hidden deep in the rain forest before it’s too late. 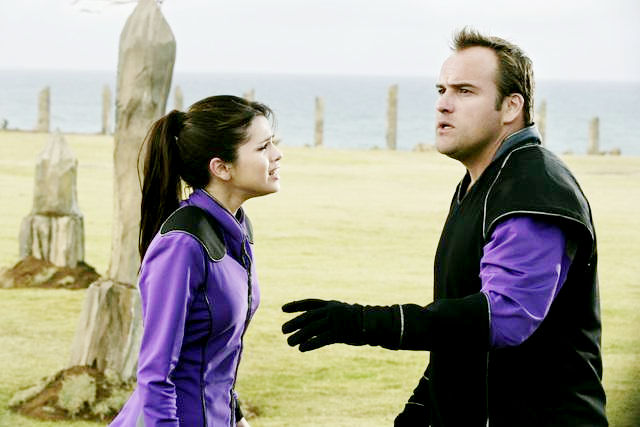 Part Indiana Jones at times and part Harry Potter, this turned out to be a fun race-against-time movie about family and teamwork. Everyone does a great job with their roles, but particularly Gomez who handles the dramatic scenes with the same grace and gravitas as she does the slapstick comedy. Her timing is also quite good as she’s able to land those cheesy jokes Disney channel movies are famous for. The parents don’t do much, but I’m sure that’s the role they have on the show as well, though from what I gathered, the dad Jerry (David DeLuise) gets to perform some magic again after giving it up to marry their mother, Theresa (Maria Canal-Barrera).

No big scares or violent action scenes keep this perfect for kids of all ages and there are plenty of sight gags and jokes to go around. While it would obviously help to have seen any of the series before watching, I had no trouble getting the gist of it without seeing an episode. There’s another TV movie that came out in 2013 that focuses even more on Alex and her misadventures, but it’s not available on Netflix. Fans of the show will enjoy seeing the characters out of New York City and I’m sure the cast has fun shooting in beautiful Puerto Rico.

Have you seen this? What do you think? How’s it compare to the TV show?