Most of the movies I review, I end up liking quite a bit. And since I’m a sucker for nostalgia, I find a lot of the remakes and reboots of stuff from my childhood end up being a lot of fun.

That is not true for this one, I’m afraid.

Disney’s “Inspector Gadget” is the story of security guard John Brown (Matthew Broderick) who dreams of being a real police officer. He also pines for lovely scientist Brenda Bradford (Joely Fisher) but when the nefarious Dr. Claw (Rupert Everett) breaks in to her and her father’s lab to steal their new robotics prototype, he is seriously injured in an explosion. Using Brenda’s technology, she and the doctors are able to rebuild him as a cyborg crime fighter, Inspector Gadget!

As he learns to use his new accessories and gizmos, Gadget blunders up nearly every task he attempts in classic style of the 80s cartoon. Meanwhile, Dr. Claw and his personal scientist Kramer (Andy Dick) develop their own RoboGadget, and evil version of our beloved Inspector and kidnap Brenda! Will Gadget figure out how so use his bells and whistles in time to save her and stop his evil doppelganger from destroying the city?

Well, here’s the thing: this movie is bad. Not insulting-bad, but pretty terrible. There are a lot of talented actors in this movie, but the writing is atrocious. It’s always a shame when filmmakers feel the need to water down their movies for a child audience. It also doesn’t help that they still manage to include some adult-themed “jokes” and gags that fall completely flat and do more so to insult any adults’ intelligence whom got suckered into watching this movie with their kids.

Despite doing moderately well at the box office during it’s initial run, critics panned it for it’s lack of substance and fans were enraged that Dr. Claw’s face is revealed when it was never seen in the cartoon (but how do you cast Rupert Everett and not show his face?). 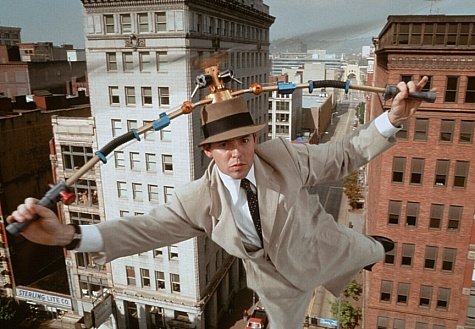 Mostly I just thought it was cheesy for the sake of cheese and seeing the origin story of Inspector Gadget removed some of the mystic about the character. We never knew how he came to be a cyborg and he had a seemingly endless supply of gadgets at his beck and call. In the movie, we have to watch him figure everything out for the purposes of comedy and he has to learn what gadgets he actually has and doesn’t have. Boo, I say! The whole point of Inspector Gadget was that he could do anything and be anything but was too inept to be at his job. Penny and Brain always solved the cases for him and he would be there at the end to get the credit for the collar.
Also, the film was directed by a guy who’s other credits almost exclusive include Playboy films and documentaries. Really Disney? That guy? Not funny, unoriginal, and sadly spawning a direct-to-video sequel with French Stewart replacing Broderick, “Inspector Gadget” pales in comparison to the original cartoon classic. Go-Go Gadget-Skip It.

Rating: 2 out of 5 Snack Packs

Have you seen this mangled mess? Tweet to me about it: @lincolnlhayes