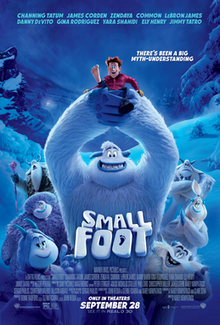 On a recent flight, I decided to watch 2018’s “Smallfoot”. I’m a fan of Channing Tatum (he once said hello to me on a film set) and Zendaya (“The Greatest Showman”, “Spiderman: Homecoming”) and the movie looked cute in trailers. Sadly, it did not deliver much more than an in-flight distraction.

The story follows Migo (Tatum) in his island village of yetis atop a mountain. They have a system of laws based on sacred stones preserved by the Stonekeepers. They dictate everything from who does what job to what lies below their island (nothing, according to the stones). They also discourage asking questions. I’m sure you can see where this is headed…

Migo is studying to become the next gong ringer who is responsible for awakening the Golden Snail each day (the sun). When his aim is off, he sails passed his village and sees a plane crash. When the pilot ejects, he sees for the first time a “smallfoot”. But that can’t be possible because they aren’t written about in the stones, and anything not in the stones can’t be. After trying to convince the village of what he saw, he called a liar and is banished by the Stonekeeper (the rapper Common). Ready to help him is the Smallfoot Evidentiary Society led by the Stonekeeper’s daughter Meechee (Zendaya). They work together to lower him down from the village through the clouds where he finds the human town at the base of the mountain. There he finds even more smallfeet, namely Percy Patterson (James Corden, “The Late Late Show”), a struggling TV host trying to find a new angle for his nature program. Migo snatches him up and takes him back up to his village. Once there, he faces even bigger challenges than before.

The story is…fine. It doesn’t really pick up until the third act, and even then, there is a very simple solution that is obviously overlooked because of how movies work (cue eye roll). Also, surprise musical! I probably should have realized it would be with the aforementioned cast, but when songs started, I was surprised. Then disappointed because they aren’t very catchy. It’s pretty hard for me watch a movie like this and not have a song or two stuck in my head (see previous reviews for “Moana” and “Lego Movie 2: The Second Part”). The Stonekeeper’s song is pretty good, but it just feels like they’re ripping off “Hamilton: The Musical”.

It’s also not very funny. I’m pretty easy to please and I didn’t laugh aloud more than a couple times, and that’s being generous. My wife was surprised sitting next to me that I wasn’t even chuckling, but the humor is very slapstick and low-brow while the story is attempting to impart some pretty solid life lessons. The pieces just didn’t go together very well.

While cute, I don’t see this movie having the staying power of similar animated films. Everyone did a great job, but I think once was enough for me.

Rating: 2 out of 5 Snack Packs

Lincoln L. Hayes is an actor and writer in NYC. He also hosts podcasts and makes short films. Find more at www.lincolnlhayes.com