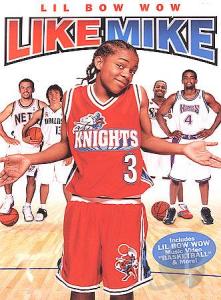 Recently on my podcast, my co-host and I picked favorite movies from our childhoods to re-watch to see if they still hold up. The film he picked was 2002’s “Like Mike” starring rapper Lil Bow Wow as a young orphan named Calvin Cambridge who finds an old pair of (supposedly) Michael Jordan’s Nikes and makes a wish to be able to play basketball “like Mike”. After lightning strikes him and the shoes (yes, really), he is imbued with the “powers” of NBA great Jordan, but all the while, only wishes someone would adopt him.

There’s a lot to unpack in this movie. Having never seen it prior nor having no real context for it, I obviously did not enjoy it as much as my co-host, who also happens to be a huge basketball fan. It is a fun movie and I enjoyed watching it, but there is a very dark subplot that I have many questions about. First of all, movies about orphans were a dime a dozen for a while. This is essentially “Annie” without the singing and basketball instead. The man who runs the orphanage is Mr. Bitterman, played manically by Crispin Glover (“Back to the Future”). He is in a different movie entirely and is dialed in to an 11. He uses the kids to make money by selling chocolate bars outside the Staples Center in LA before (fictional) Los Angeles Knights basketball games. Why they didn’t use the Lakers or the Clippers – two real NBA teams based in LA – is beyond me, but regardless. After a rough loss, Calvin approaches Coach Wagner (Robert Forster) and after impressing him with his b-ball knowledge, offers him free tickets to the next game. During halftime, there’s a raffle to play with the Knights star player Tracy Reynolds (Morris Chestnut, “Under Seige 2”, “Boyz N the Hood”).

When Calvin turns out to be really good (some might say… like Mike), Reyonlds must step up his game or risk being humiliated by a 13 year old kid. Calvin performs an impossible slam dunk and wows the crowd, earning him a one-day contract to play with the Knights.

Thinking this is a real chance to play, Calvin is elated, only to be devastated when he learns it’s just a publicity stunt. Near the end of the game, while losing, other players convince the Coach to put him in. Guess what? They win the game! Calvin is a superstar and is signed on for the rest of the season and Tracy is assigned as his mentor, something he is not at all interested in doing. Hilarity ensues and tensions run high as the two butt heads every step of the way.

Meanwhile, Mr. Bitterman has signed a contract to collect all of Calvin’s earnings until he is 18 or gets adopted, so he goes out of his way to prevent this. It’s…pretty horrible. He makes it no secret that he is using Calvin to make money, even going as far as to recruit orphanage bully Ox (Jesse Plemons, “Breaking Bad,” “Game Night”, I want his career) to steal Calvin’s “magic shoes” so he can bet against the Knights and make a huge pay day.

The performances are all pretty good, aside from Jonathan Lipniki (“Jerry Maguire”) and Chesnut who are mostly ok. But the biggest take-away from this movie actually came from my co-host. Where is Michael Jordan in this movie?! It’s almost entirely about him and he was STILL PLAYING at this point in 2001-2002. Everyone is talking about him in this movie, saying he’s the greatest player of all time, and he can’t be bothered to show up for an afternoon for a cameo appearance? If you want to read more of my co-host’s rant (which is very smart and funny), it’s available on Reddit.com.

All in all, this movie is good. It’s fun, exciting, magical, and whimsical. You’ll love it even more if you’re a basketball fan thanks to the countless player cameos throughout. It’s also fun to see so many familiar faces from early in their careers. It is, however, kind of messed up in a way I was not expecting. I don’t know if kids would pick up on it, but it’s there and it’s weird. If you like sports movies, give it a go!

Lincoln L. Hayes is an actor and filmmaker living in Vermont. Very soon he’ll be back in NYC pursing his career, but still writing about kids movies when he can. http://www.lincolnlhayes.com